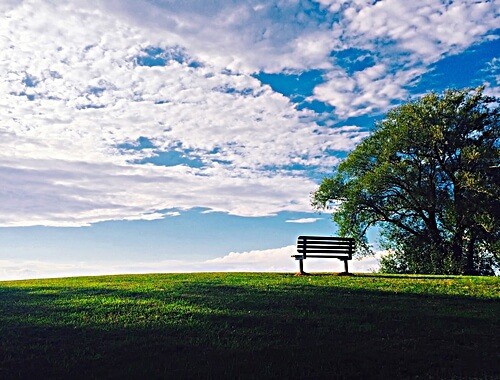 Once upon a time, there was a Dream.

A small one. But her name was big – The Dream. She was sitting on a pink wooden bench in the park, just under a massive old tree. The tree’s branches were so heavy from the leaves that were hanging over the Dream’s head. It was a vivid park – freshly green, with large meadows and white alleys.

With areas hidden from The Dream’s eyes.

They were calling her to go and explore them.

But The Dream was happy just where she was – under the massive tree with the dense branches and the happy green leaves falling over her head. It was giving her so much comfort that The Dream even decided to name it like that – The Comfort Tree.

There was no one else around, so they became friends – inseparable friends.

The Dream was talking to the tree every day. And the subject was always the same – Her sisters.

The Dream had many other sisters. They were all older than her. She was the smallest one despite her weird name.

Anyway, as she was often saying, the important thing is that only she survived. From all of her sisters, only she was still here in this beautiful sunny park, admiring the world, under the comfort of the large tree.

Her oldest sister was the bravest one. She grew up quickly and was always on the go to explore the park, to see what she could find behind the comfort tree and into the woods. She wanted to reach the waterfall.

Ah, the waterfall. I didn’t tell you about it, did I?

The waterfall is a legend.

Actually, The Dream believed it was an old story, whispered by the winds coming from the other parks around. The Dream never saw this famous waterfall from her pink bench, under the stable Comfort tree. She didn’t believe it exists. It was only a legend to full the other Dreams – her sisters, to leave the bench and to lose themselves forever.

But sometimes… Only sometimes… at night time, when the tree was sleeping, and the stars were shining from above… only sometimes, she could hear something. It was like thousands, no – millions of small diamond bells ringing in the night… Very quiet and gentle… like many, many kisses one after another. Like magic. The Dream often thought this melodious ringing was the sound of the many other Dreams, urging her to join them.

But the tree was offering so much that it was hard to imagine something better could exist. So she just had to close her eyes, and the ringing was gone.

Her oldest sister though… She was on the urge to find this waterfall. The moment she was able to leave the bench she almost flew through the meadow and left her sisters and the bench behind.

The same day, a chill wind of disappointment came back to announce their sister is never to come back again.

It was a sad day.

Not so long after that day though, another one of The Dream’s sisters decided to go out and search for the waterfall. The Dream really didn’t understand how that was possible. She tried to convince her to stay on the bench, under the tree, in the sunny park.

But her sister refused to listen.

So she left with the excitement of a small child and ran through the meadow, into the woods.

The sisters were waiting. And waiting. They were waiting for hours and days. They even started thinking that their sister found the waterfall.

But only to be left in grief when the cool wind of disappointment suddenly came one night.

The story was the same for all of The Dream’s sisters.

She lost them one by one. And her heart was shrinking a little bit every time.

So she decided never to leave the bench.

It was a perfect place to spend her life. She had her friend – The Comfort Tree – big and ready to protect her. She had the bench – pink and wooden. She had the meadow just in front of her – to offer the best view of the woods. She had everything…

But sometimes… only sometimes… at night time, when the tree was sleeping, and the stars were shining from above… she could hear those soft bells. Like thousands, no – millions of small diamonds, ringing just behind the woods.

And sometimes… only sometimes… there was this warm wind fondling the bench. He was trying to climb it, but The Dream was kicking him away every time. He was claiming that his name is Future and The Dream had to follow him. But she didn’t want to do that. So instead, she was waking the tree up every time. The Comfort Tree was spreading his branches around The Dream, and she was able to sleep again.

One day something extraordinary happened. The Dream saw that there was someone else there – just behind the first bushes of the wood.

She got so scared that she shrunk herself and lifted her feet on the pink bench. The Comfort tree lowered his branches and surrounded her with his leaves. There was only one small gap between two leaves so that she could look at the approaching new creature. It was a light cloud floating over the ground with the grace of a dancer.

– What do you want? – The Dream asked

– Me?! Why? Who are you? How do you know me? – The Dream moved a bit the leaves so she could look at the mysterious light cloud.

– Don’t be afraid; I am Hope – the cloud continued to smile. – I knew your sisters.

– Did you kill them?! – almost screamed The Dream

– No! – Hope’s laugh was like an echo of small diamond’s ringing, reminding of… – They are not dead!

– True, they are never to come back again. But they are alive. You just cannot see them anymore. They are lost.

– Lost… – The Dream repeated the word almost without a sound. – Anyway – she said – I am not coming with you. I don’t want to get lost as well. I have everything I need here. I have my friend – The Comfort Tree, and I have my pink bench. I have my green meadow and the view of the woods. Why would I leave this place?

– To find the waterfall. – Hope just simply said out loud The Dream’s thoughts

– This is just a legend!  – she said quietly

– Have you seen it? – The Dream moved the leaves away from her face and leant over the bench so she could hear better

– Hey, what is happening to you? – The Dream reached to Hope, and her fingers touched the soft face of her new friend. Hope smiled, and her normal light colour came back.

– You have to come with me. You will die here. You are sick! – Hope said

Fear! Panic choked The Dream for a second. Fear was the plague of The Dream’s world! She never saw it, but she had heard of it. And now she had it?!

– But I feel happy. I don’t have Fear! – she refused to believe

– Yes, this is Fear’s lie to go deep into you. Then it will kill you. Fear kills dreams. That’s his favourite thing to do.

– Is that what killed my sisters?

– It just shrunk them. But it will kill you because you don’t fight it. And after that, you sisters will die as well.

– I have to save my sisters. – The Dream whispered and looked at the Comfort Tree – What about my tree? I don’t want to leave him.

– Take a small leaf of it, and we will plant it around the waterfall. There’s a lot of Happiness there, and he will take care of your friend. But for now, you have to say goodbye.

The Dream looked into Hope’s eyes and then looked at her old friend. The leaves were almost yellow now. The Comfort tree was dying.

– I have to save my sisters. – The Dream whispered.

She reached to one of the branches and took one of the last green leaves. She put it in her pocket and jumped off the bench. Her fingers touched the pink wood for the last time.

Hope was holding her hand, and both of them took the First step into the woods.