How to save your relationship and make him stay with you?

You know he has feelings for you, and you wonder how to make him stay. Things have been great at the beginning, and you’re falling in love with him, but how to make him commit to you?

It’s rare to meet a man who makes you feel like this time is worth to fight for him.

But now you could totally relate to that.

He stormed into your life and mind; he was gentle, sweet and made you believe in love again.

You wondered for a while if it’s worth to open your heart towards him, but in the end, you decided to do it.

And now you have this little panic button in your chest that threatens to explode: How to make him stay with you forever?

How to make him commit to you?

Men like to commit too, but why isn’t he doing it yet? How to make him fall in love with you so hard that he never let you go?

I have an important tip to help you do exactly that. Read carefully as your future might depend on it.

How to win his heart and make him commit to you

Man’s psychology is rather confusing. Some men need time to fall in love with the woman in their life. It’s like they struggle letting go of their freedom (as they say), and commit to a long-term relationship.

Others rush through the relationship, they set on fire everything in the woman’s world and then leave her to deal with the fire by herself.

But both of these types could be handled easily by using one small secret.

Do you agree that men love to compete? They live for the win, they chase it, they tear their throats raving towards it, and they feel like gods once getting to the final as winners.

To men, the win isn’t just a simple end of the game; it’s the beginning of their glory. And the harder the win – the greatest the glory.

But making a man chase you isn’t something you want to do neither is something I’d ever advise you to do. You aren’t a piece of meat he must chase through the woods. It’s the 21st century, and playing games with other people’s mind isn’t cool nor modern.

Tap into his hero instinct

Actually, it’s full of them even if you and I forget to notice it.

Actually, every man around you is a hero.

But once you’ve made him the hero of your life, he won’t move away from your side. Ever.

Here’s a question for you: What’s the common thing between Die Hard, The Terminator, Gladiator and Brave Heart?

I’ll tell you: There are two very important things in common about these movies: they are all about being a hero and fighting until you win (or die), and they are man’s favourite movies of all times.

No man will ever admit they secretly want to be heroes. But they will all identify themselves as such if they have the chance to do it.

And that’s your secret weapon to make your man fall in love with you and stick around for a long time.

What about your independency

I’m a woman, and I know what you think right now: I’m a grown*** woman, I can handle myself just fine and don’t really need a hero in the house to bow in front of.

And I agree with you.

I could change the bulbs in my house, find a car service if I need to fix my car, I could paint walls and fix broken shelves with the help of YouTube and lots of not-so-pretty words. But I can do all that and if I need to – I can do even more.

The truth is – you don’t need a hero because you are the hero in your life and that’s all that matters.

But do you know what else matters?

To feel that someone wants you and need you in his life. It matters to be respected and heard. It matters to feel like you could contribute to someone’s happiness and to feel his admiration.

And that’s exactly how your man wants to feel.

He doesn’t want you to call him every time you need to open a jar, but he would love to make you feel comfortable and get a kiss and hug in exchange.

How to tap into a man’s hero instinct

Now that you know the importance of making a man feel like he’s your hero, it’s time to find out how to do it.

To skip straight to the answer check out this short video that reveals how to trigger his hero instinct and make him commit to you forever.

And here’s a simple truth I’d like you to think about:

Men love to be admired and appreciated

I cannot describe my shock of my fiance’s reaction when I express admiration and appreciation. He has the exact same reaction: he’s so surprised I’ve noticed something he’s proud of, his eyes get wide opened, his look softens and most importantly: he comes up with at least three other ways to make me happy.

What more could I ask for? He truly loves making me smile and feel loved. And it’s all because I know how to make him feel like a hero.

Appreciation is one of the most popular love languages among men. Gary Chapman explains exactly how to find out what your man’s love language is in his book.

Expressing appreciation at the right time and in the right way is one of your best chances to make him feel loved and to want to make you feel loved too.

But why doesn’t he just say it?

Why men never talk about their need to feel heroes?

Why men never mention it when we ask them how to make them happy?

That’s a huge difference between man and women. This difference is the reason women feel insecure and man – unappreciated.

But if you ask a man the same question, he will shrug his shoulders and tell you that he is already happy and doesn’t need anything (or will ask you to jump with him in the bed).

A man would never admit he wants to be a hero because he doesn’t want to push things to make them happen. He wants to become your hero almost by accident, in a natural way, and that will make him even more committed to you.

How to make him stay by discovering the hero in him

There are a few simple secrets to making him feel important and like a hero in your eyes.

Be grateful for the things he does for you

I cannot stress this enough.

Sooner or later, we start taking things around us for granted. Gestures that were amazing to us at the beginning seem normal today. But that’s the first mistake you probably make that chases him away.

Be grateful for the things he does for you, no matter how small they are.

He refills your glass with water – thank him.

He holds your coat to help you put it on – thank him.

He took the trash out – thank him.

Remember, by expressing admiration; you earn his admiration.

Stop being OK with everything and available for everything

He needs to please you and feels bored when you agree to everything.

That doesn’t translate into “be oppose to each one of his ideas”.

But you need to have an opinion and express it respectfully. That’s how you earn his respect.

If he told you he has plans for Friday evening that don’t include you, but suddenly calls you on Friday night, don’t jump out of excitement and don’t think he just found out he prefers to spend the time with you. Make your plans and don’t invite him to join you. By keeping your word (and his), you earn his respect. Next time he wants to make plans without you, he’ll know that you won’t stay home and watch sad romantic comedies waiting for him to grant you with his attention.

A confident woman is irresistible.

A woman who knows her worth is irresistible.

When you appreciate and admire him, you become irresistible.

By being grateful, you become irresistible.

By tapping into his hero instinct, you become his obsession, and he can’t wait to make you happy.

Here’s a powerful tool to help you make him stay into your life, commit to you, respect you and make you happy.

Check the short video below for more details. 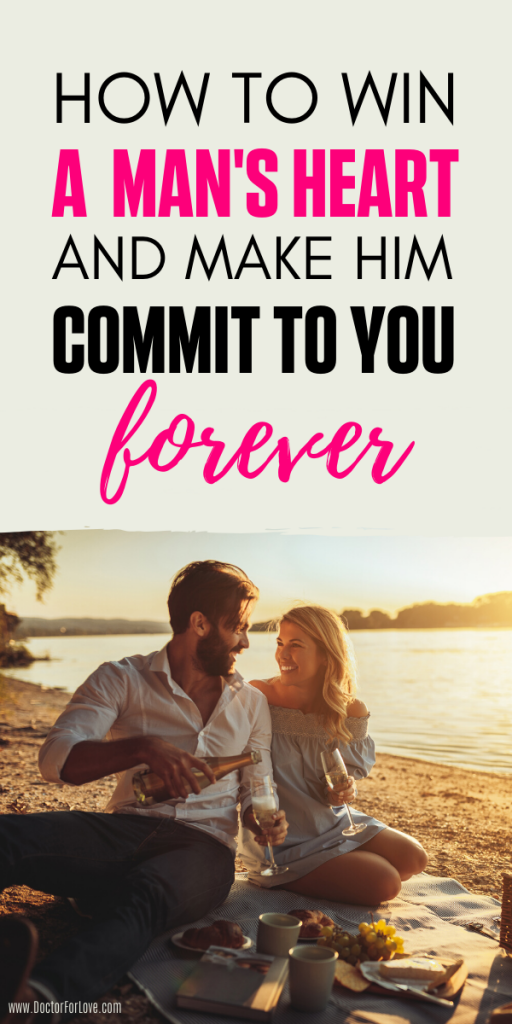 How to win his heart and how to make him stay?