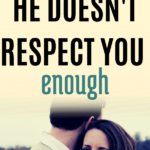 And what to do if you are disrespected

Is there a lack of respect in your relationship?

Do you feel something’s wrong but not sure what?

Are there any tiny bells ringing in your head every now and then?

Where is the border between “I’m making things up” and “This is so disrespectful”?

We are always told to be aware of being used, but do we know how to protect ourselves from hidden disrespect?

In this article, I will list 10 warning signs of disrespect you should never ignore in your relationship, no matter what.

We often forget to pay attention to respect and appreciation. If your feelings are strong, and your hormones are going wild, it’s common to ignore small signs that something’s not right.

It is not your fault.

You would never think that the person you love would disrespect you.

But disrespect loves to take different forms, it’s hidden and we usually see it was there long after the relationship ended.

If there is an alarm going off in your head, check below ten signs for lack of respect in a relationship.

1. Your partner is continuously reading your messages and replying back after few hours.

I had a boyfriend who would ignore my messages all the time. Sometimes he was at work so I was not bothered by that fact. But he was doing it even when he was home.

He would read it and leave it aside for the next hour or two, and reply then. Once, we were in the middle of an important conversation when suddenly, he stopped answering.

I got worried and had to drive almost an hour to his place to see him watching TV and relaxing on the sofa. Do you think this was disrespectful?

Many times we don’t have the opportunity to reply  “I’ll text you later” so we leave the phone aside and go back to it later on. But we are all grown-ups and it’s nice to act as such.

Ignoring your messages indicates a problem.

2. He/she makes appointments with you and after that cancels them.

It is the most obvious sign of disrespect in any relationship.

If I cancel a date with someone I could only have two reasons:

First: Something came up at the last minute, it’s urgent and I cannot postpone it. That’s OK.

Second: There is no second reason.

It is respectful to myself and the other to go on that date and then do whatever else I wanted to do instead. Everything else is pure disrespect in the relationship.

3. Your loved one is checking your phone on a daily basis…

… and if you try to stop him he gets angry – “Are you hiding something?”, “So what, I want to be sure you’re faithful”, “You can check mine if you want”.

This is a huge warning sign to run, my dear.

It’s overlooked by too many people out there.

This is a lack of respect and could evolve into something much more serious if you don’t talk about it.

Going into your personal space and making you feel unnecessary guilty is disrespectful and rude.

Honestly, you don’t need someone like that around you.

Another sign of lack of respect in a relationship is the “invasion” into your personal space.

Yes, you’re in love. You want to spend time together and share everything with each other.

However, you’re an independent human being, and you’ve got your personal space.

You need this healthy personal space.

If your partner goes over the level that’s comfortable for you without invitation or permission, is rude, annoying and sometimes – disturbing.

An example of that is checking your phone or reading your diary, asking for passwords and getting angry if you don’t want to provide access to those.

Don’t allow to be fooled you are the one that does something wrong.

Do you remember the never-answer-my-messages-guy?

He ticked most of the boxes in this article, but this one – he was (probably still is) The King of Late-For-A-Date.

On our first date, he came half an hour later than what we had arranged.

I thought he go into bad traffic. Turned out, he lived just two streets down the road.

Don’t do my mistake.

Here’s what Late-For-A-Date attitude tells me:

– “Getting ready and looking perfect is (always) more important than coming on time, and it doesn’t matter if you’re standing somewhere in the cold/heat/alone waiting for me.”.

It may sound harsh, but if you managed to get on time, there is no excuse for him not to do it as well.

Could be bad time management but it is as well a sign of lack of respect in a relationship.

6. Your partner doesn’t listen to your opinion.

You may think it’s easy to spot this one, but it’s not.

So, you have a discussion, and he doesn’t even listen to your opinion.

When you talk you could see in their eyes that what you say is pointless. Your words hang in the air… awkwardly.

If you’re in a long relationship, the chances are you don’t even know what’s going on.

Next time you and your partner talk, try to see if he listens to you and tries to understand you. Respect is giving the other a chance to speak up and listen to what he says carefully.

Don’t let yourself be fooled about this one.

For some people, there’s always a reason not to keep their promises.

It’s like the school story where the dog eats the homework… every time!

At some point, each one of us (including you) has to start keeping our promises because other people count on that.

It is a sign of lack of respect in a relationship and it’s kind of easy to spot.

Could you imagine how your life together would look like – he makes a promise, and you have no idea if that’s going to happen or not. Wise people say:

8. Your things are less important than your partner’s.

Putting his goals, dreams, plans, and everything that concerns him above yours all the time is disrespectful.

We all have goals and dreams, a path we walk on and if your priorities are on the bottom all the time – well, I have bad news for you: your partner doesn’t respect you! Didn’t you have a life to live as well?!

No, I don’t mean that dirty talk.

I mean the conversation that makes you feel bad about yourself.

The discussion that points out your mistakes and ruins your mood even more. We all have our “down” moments.

And your partner’s job is to boost your self-esteem, not to bury it as deep as possible.

If that happens to you – run!

It’s time to stop it and to start loving yourself more than the other do.

10. You never feel you’re his priority.

You know very well that a relationship is a form of a partnership.

And a partnership is you and the other together, walking on the aisle of life. Both of you equally important, in love, and respectful to each other.

Spending your precious time on Earth with someone who doesn’t think you’re more important than 90% of the people in his life, is just wrong.

How should you deal with the lack of respect in a relationship?

Once you get to the place where you could spot the disrespect – that’s half of the job done.

Don’t get confused by your partner that everything happens only in your mind. If you feel something’s wrong, it usually is wrong.

Believe in your intuition about what’s next.

Is there a chance to express yourself, your feelings and worries, and the other to understand you? If that’s the case – go for it.

Expect confusion and frustration – nobody likes to be told he’s been disrespectful.

However, once all that is gone, demand change. I know many people say – we don’t change. But somehow, we do. In fact, Steven Aitchison said:

“People change for two reasons: either their minds have been opened, or their hearts have been broken.”

You have your right to be respected by the person who shares your home, bed, and life.

If you enjoyed this post and believe my advice helps you, don’t forget to subscribe to our blog.

↓Pin This For Later↓

10 Signs of Disrespect in a Relationship You Shouldn’t Ignore

Blogger, dreamer, procrastinator, and lover of everything soul-touching. My mission is to make you laugh, provoke your thoughts, light up your day and inspire you to fall in love with life and yourself.

I am portuguese and when my partner she is brasilian refers me to her male friend on the phone which I heard by change, "oh, the portuguese is near me, chat to you later as I don't want him to know too much about the sale of my stand for sale. Refering to me as the Portuguese is that showing disrespect to me?

In my opinion, if she refers to you as just a male friend is very disrespectful. Even the fact she wants to hide details on some sale of an item is also very suspicious and disrespectful in its base...

Hello, my man kept repeating himself that i don't respect him while i did lots trying to bring him back to normal after a certain hard time he was into .I think my mistake was i asked for a break he took it for a break-up. And from that moment he changed completly upto when i decided to leave and be happy.

[…] when he wants, to have sex and you are not in the mood, he still does what he wants. This is a sign of no respect. He does not care for your feelings. You should talk about this to him so that he will understand […]

STILL SINGLE? LET ME TELL YOU THE REASONS

[…] Related post: 10 WORRYING SIGNS OF LACK OF RESPECT IN YOUR RELATIONSHIP […]

[…] signs of disrespect, it doesn’t mean there are no hidden ones. Make sure you have a look at those 10 signs of disrespect in a relationship, so you can be alerted if something’s wrong. If the girl you’re with loves you, she will […]