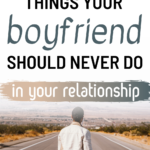 Things Guys Do Wrong In The Relationship, but You Shouldn’t Ignore

You know something’s off about him; that’s why you need more info on the things your boyfriend should never do in your relationship.

You are in the right spot.

I’ve noticed that nowadays, women need more clarity on what’s normal in a relationship and where the boundaries get crossed.

Women are often told we’re (too) emotional, take things (too) personally when we shouldn’t, and create huge problems out of small situations.

Yep, ditch the guy who tells you that. You will see why just a few rows below.

Here’s the deal with your boyfriend:

He might look like the right one, in theory, but something on the back of your mind keeps waving a red flag?

You could ignore it, but just in case, you decide to check if the way your guys acts is normal.

What is acceptable, and what is unacceptable in a relationship?

Is the way he treats you right?

What are the things you must never put up with?

See 17 things guys could do wrong in a relationship, and don’t ignore any of them as you could easily end up in an abusive or toxic relationship.

17 Things Your Boyfriend Should Never Do

This isn’t a checklist for a bad boyfriend. Instead, see it as a guide on what’s completely unacceptable from any man in your life.

Disclaimer: Some of the things are present in every relationship or marriage, but in a lighter form. Be aware of the size of the problem in your relationship. Nobody is perfect, yet, when considering a guy as husband material, he shouldn’t do any of these things.

1. Your Boyfriend Should Never Intentionally Ignore Your Feelings

It really doesn’t matter if you’re having a hard time when PMSing.

Your feelings matter, and he should never ignore them.

The guy who says you’re overreacting, exaggerating, and are too emotional – he is not the right guy for you.

We are emotional human beings. He might not understand why you feel that way. But he should respect it! 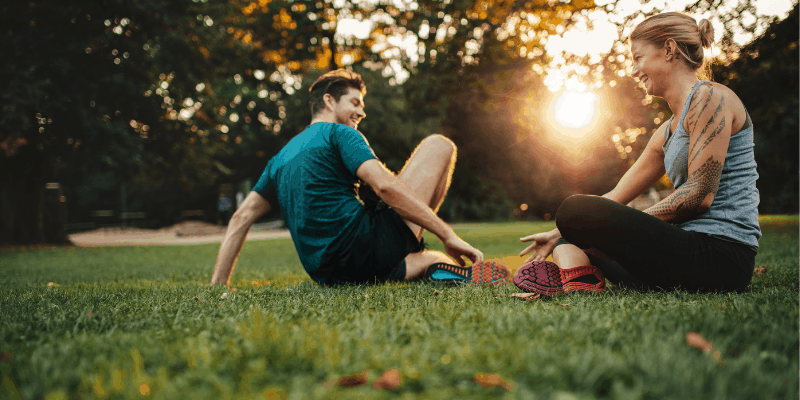 Too many girls say, “My boyfriend comments on my body.”

Unless he expresses his awe of your uniqueness and beauty, he shouldn’t comment on your body in any other way. Never!

I cannot underline this enough. Your boyfriend’s job is to make sure you feel beautiful and happy by his side, not to diminish your self-esteem and make you feel miserable about yourself.

If he is slightly letting your know that you might need to lose just a few pounds to look perfect, there’s only one thing you should do – run as fast and as far as possible.

He doesn’t deserve to be by your side.

Your boyfriend's job is to make sure you feel beautiful and happy by his side, not to diminish your self-esteem and make you feel miserable about yourself.Click to Tweet

3. Your Boyfriend Should Never Disrespect you

I’ve got a full post on the signs of disrespect you must never ignore; check it later.

But here’s the short version: if you feel disrespected, then you probably are.

If he doesn’t want to hear your opinion on different matters, if he checks your phone and asks you unreasonable questions, if he’s been rude, ignores you, and looks down on you – that’s all disrespect.

Your boyfriend should never act that way.

4. He shouldn’t make you work for his attention 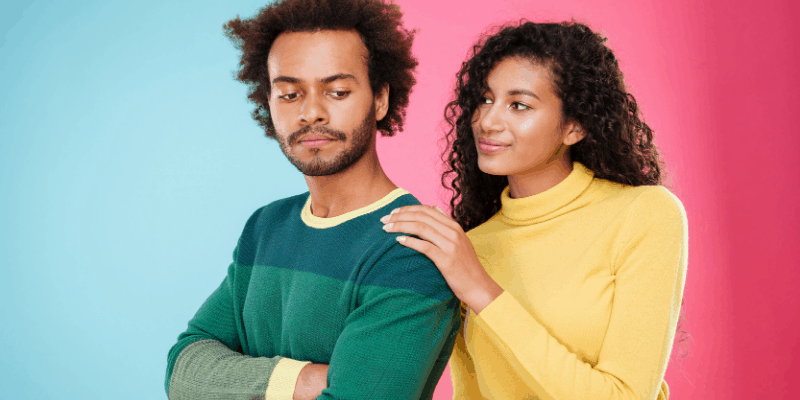 One of the worse things a boyfriend could do in a relationship is to make you chase him and fight for his attention.

He isn’t your superior, and you aren’t entitled to “work for it” (“it” – his attention).

If you feel that your man doesn’t really notice you unless you’re right in front of him, if he shows you that you must do something for him to be with him, then he’s the wrong guy.

5. He Shouldn’t Manipulate You

Probably half of the things on this list go into this category – manipulation in the relationship.

However, you might be manipulated, and you don’t even know it.

If he often plays the role of a victim, if he ignores you unless you do something for him, if he’s playing hot and cold with you and gives you mixed signals about his feelings – your boyfriend manipulates you.

6. He Shouldn’t discourage You 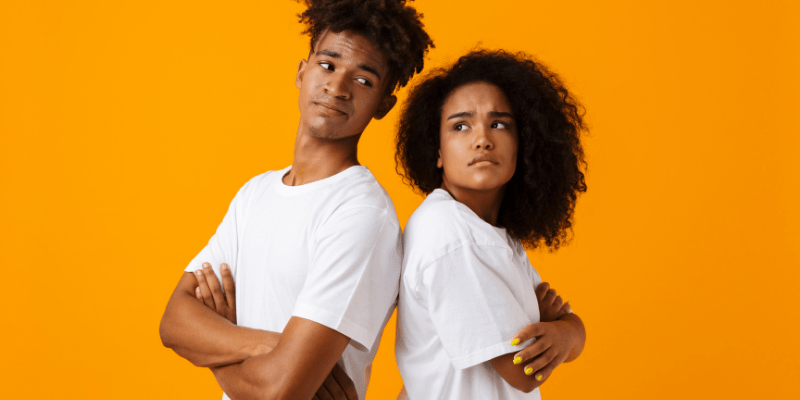 When we talk about the things your boyfriend shouldn’t do to you, this one is in the top 10.

You want your partner to be supportive and to stand behind your back. He might not agree with everything you do, but he wouldn’t discourage you from going for something that makes you happy.

7. Your boyfriend shouldn’t make you doubt yourself

You might not be the most confident person on this planet, and that’s okay.

You have your doubts and fears, and you struggle enough to overcome your own negative emotions and limiting beliefs.

What you don’t need is a boyfriend who adds up to that self-doubt and makes you feel even worse about your abilities.

Nobody says he should tell you to go ahead and make a potential mistake, but your partner must be mindful of your feelings and self-esteem.

8. He Must not Compare You To Other Women 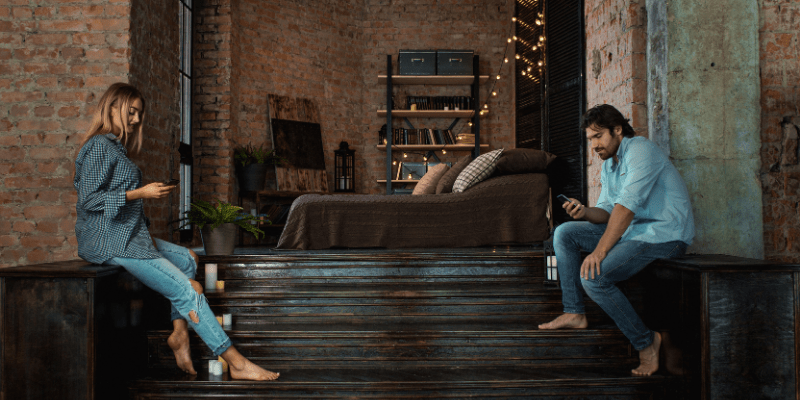 Of course, we talk about the negative type of comparing. Nobody complains from being told she’s better.

Negative comparing is another huge NO of the things your boyfriend should never do to you.

Comparing you to his exes, to the woman behind you in the bus, to anyone, in fact, is a deal-breaker.

So, if your guy tries to let you know another woman is better than you – send him to her.

If your guy tries to let you know another woman is better than you - send him to her. Click to Tweet

9. Your Boyfriend Makes You Ignore Yourself

Your boyfriend shouldn’t make you ignore yourself and your well-being so you could nurture him.

You need your self-care routines, your spa-moments, your bath on Thursday evening, your alone-time, your acts of self-love. Please don’t give up on any of them. Adjust them, but don’t exclude them from your life.

This one might be missing on most lists of things your boyfriend shouldn’t do, but I can’t let you ignore it.

Our values, goals, and plans might go a slight turn when we meet the right person. In fact, they might evolve and get bigger and brighter, and that’s a huge sign you are with your soulmate, and he truly loves you.

However, your boyfriend should never push you to change your values, to ignore your education, move somewhere you don’t want to live, have or not have kids when you decided otherwise, and so on.

Be sure you know your deal-breakers, and be clear with your decisions.

11. He Must Not Pull You Away From Everyone

Do you remember that friend you had, and then she got into a relationship with some guy, and you never saw her again?

He didn’t take her away, but he slowly pulled her away from her world, and now you don’t even feel like friends with her (even though you chat twice a year…!)

What if you’re that friend?

What if your boyfriend pulls you away from everything and everyone that give you security and makes you happy?

What if he’s totally overstepping, and you shouldn’t tolerate it?

Oh, you know that guy who always brings up things from five months ago? He never forgets that you accidentally mistreated him, but he forgot you apologized at least 50 times since.

Yeah, you are still dating that man. It looks like he has a huge book named “Things I will never let go of” and he carries it around in case he needs you to feel guilty about something.

You’re right! You don’t need him anymore. The person you want to spend your time with (and maybe marry him) must be able to let things go.

We all make mistakes. That’s what makes us human (I know, cliché!)

That’s so obvious, but I didn’t want you to think I’ve missed it.

Your boyfriend shouldn’t ever be rude to you.

No, it doesn’t matter if this is the way he is when angry. You shouldn’t care if he can’t change himself. You must never allow him to be rude. Being rude in a relationship could easily slip and turn into abuse. Be aware!

Being rude in a relationship could easily slip and turn into abuse.Click to Tweet

14. You boyfriend shouldn’t ask you to fix his problems

You aren’t with him to fix his issues. And he isn’t with you to fix yours. You could support each other in the process, but nobody should do the work instead of the other.

That’s the deal. Does he often break it? Is he expecting you to run and fix things in his life?

That’s a thing a boyfriend shouldn’t do to you.

15. He Must Not Ignore Your Little Wins 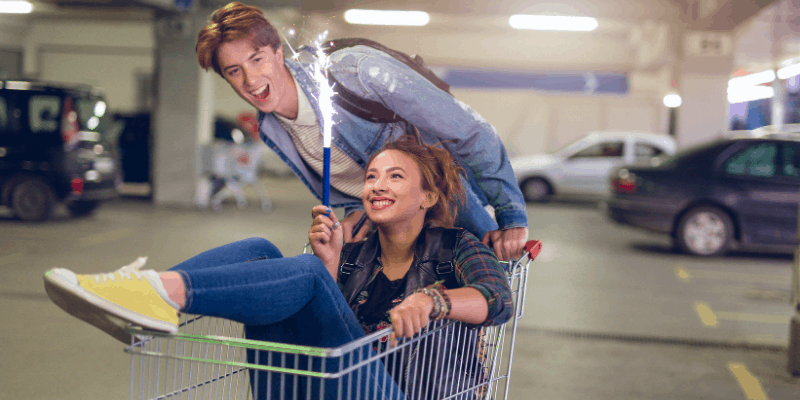 Life is a chain of tiny moments in different colors.

It often comes with grey storms and black clouds, but often we have our bright wins – smaller or bigger.

Your partner shouldn’t skip your win; he must not tell you they’re insignificant and encourage you to do something “meaningful instead.”

Life is a chain of tiny moments in different colours.  It often comes with grey storms and black clouds, but often we have our bright wins - smaller or bigger. Click to Tweet

16. He Shouldn’t Make You Compromise All The Time

And often, one side is happier than the other by those compromises.

However, the worst relationship habit is if you are the one who compromises all the time. You shouldn’t be the one who steps down after every argument.

A healthy relationship cannot survive and turn into a long-lasting partnership unless both parties make compromises.Click to Tweet

17. He shouldn’t be another problem to deal with 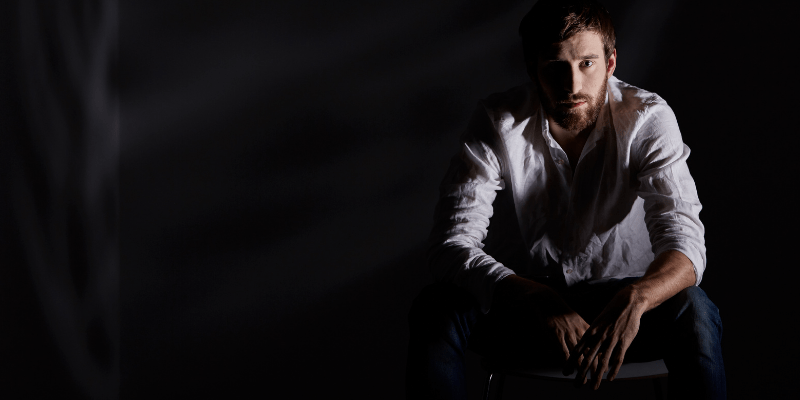 I will use this one as a conclusion to the whole post.

It doesn’t matter how long you’ve been together, and it doesn’t matter if you plan on sticking together for the rest of your lives. Your boyfriend shouldn’t create more problems and hardships. He shouldn’t be another problem to deal with.

He must be that strong shoulder and support we all need from our partners. And we should be their support and warm place to come to.

A relationship should make your life easier, happier, more meaningful, and pushing you to evolve. Together. And as individuals too.

Above were the things your boyfriend shouldn’t do.

Did you see it as a checklist or as a guide?

A relationship should make your life easier, happier, more meaningful, and pushing you to evolve. Together. And as individuals too.Click to Tweet 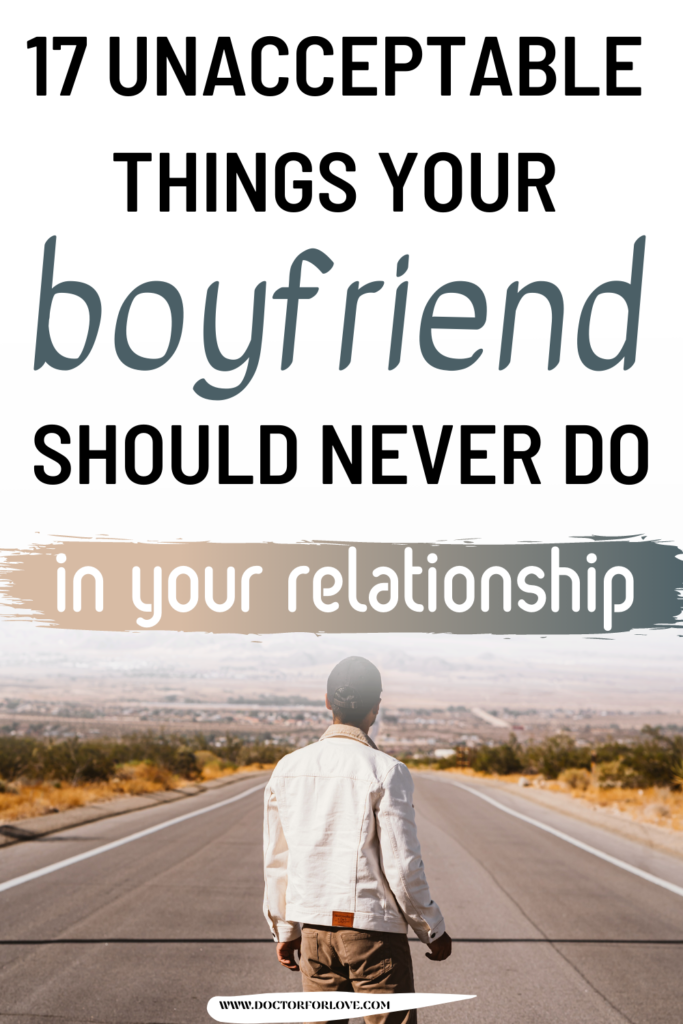 17 Things Your Boyfriend Should Never Do To You